A few months later suddenly four different white label Motorhead singles were up fot auction on Ebay from the seller aliasthecompass. Oh did I want them! I decided to go for two of them and won them for about GBP 120. I thought the style of the auction, the font, the blue and red colour of the letters, the way to mention that they were from a former EMI employed, looked familiar but did not think of it much more. I was quite busy with things at work and my family at the time. It took some time for them to arrive and I had to ask the seller several times what was going on. The seller informed me that they had been returned to him and he had never had such an experience before. He was so sorry (now I think it took time because it took him a lot of time to bleach the labels, which was not a very good job). At last I got them but as I was busy I did not check them out properly. I wish I had. Time moved on and it was almost Christmas.

Then there was a new test pressing for sale on Ebay. A blue vinyl copy of the single Iron Fist with white labels with a big “A” and a big “B”. This was on offer from the seller plasticplatter. I asked him about it because I had never seen something like it before. And to my surprise the seller was my good old friend bluepyevinnie! This is what he wrote:

“Hello. This is Vinnie here, you bought some stuff earlier in the year from me. These are from the same source as the test pressings and was originally sent to John Brierly who worked in the offices for BRONZE RECORDS for a while. It just has a large A and a large B on each label. The B-side looks exactly the same accept it says B instead of A. It's truer to say this is a test pressing rather than a promo. I had the red vinyl version of this a few years ago with the same A & B label design and to the best of my knowledge these labels were only used on coloured vinyl singles. Hope that helps,
Regards,
Vinnie” 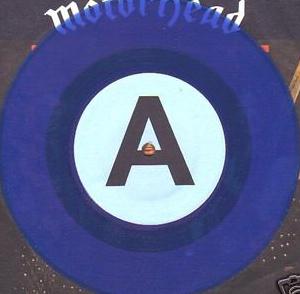 Blue vinyl of Iron Fist UK single with A label. This copy was sold by plasticplatter (alias bluepyevinnie alias aliasthecompass) and was most likely a fake!

I was bidding on it but lost. Someone got it for GBP 132. Of course the deal was made private so I don´t know who it was. But 15 days later I received this from Vinnie: